Welcome to second part of our Object Detection blog series!
I’m Al of AI Research and Innovation Hub (ARIH). In this blog, I will briefly introduce "Deep Learning Approaches for Abandoned Object Detection".

Video surveillance automation for monitoring public spaces and increasing security measures has gained popularity over the years. One common application is abandoned object detection (AOD) which focuses on the early identification of unattended and static objects. With AOD, suspicious or lost items are automatically flagged so security personnel can be immediately alerted for appropriate actions.

In computer vision literature, abandoned objects are further defined in spatio-temporal terms. Specifically, the owner must stand or sit near the object for 30 consecutive seconds, usually within three meters. Otherwise, an object will be declared abandoned.

Conventional approaches to AOD mainly focus on foreground segmentation and stationary foreground detection to generate candidate objects (such as the ones shown in Figure 2). These background subtraction approaches, however, are not robust to complex scenarios and other visual factors such as low image quality, and illumination changes leading to instances of false or missed alarms.

To overcome these drawbacks, some researchers have explored the additional use of deep learning to improve the effectiveness and accuracy of previous approaches.

As shown in Figure 3, one strategy is by adding a Convolutional Neural Network (CNN) classifier (i.e. Inceptionv3, GoogleNet) stage to validate the hypothesis generated in the static object detection phase. In this arrangement, the CNN is deployed for item verification of suspected abandoned objects (i.e. less false positives), or for further confirmation of real abandonment (i.e. less false positives if there is no owner).

Another and more recent approach are through the use of more powerful CNN frameworks for people and object detection. Some famous models include the R-CNN and YOLO models, to generate class labels and bounding boxes, which would be used in the logic design of further frame processing i.e. calculating distances over time, and the application of spatio-temporal rule of abandonment.

In Contractor, et. Al (2018), using Inceptionv3 pretrained on ImageNet, the last layer was trained with annotated frame data to differentiate between scenes with and without abandoned luggage. In this simple approach, the model learns the background and can therefore detect abandoned luggage as an anomalous event, which can be useful for creating models specific to location and the type of event.

On the other hand, in Smeureanu & Ionescu (2018), the two-step approach as described in Figure 3 was used, where a region of interest (ROI) was identified through static object detection, then using those as input to two successive CNNs, so-called ‘Cascade of Classifiers’.

As in Figure 5, the first CNN is for verifying that the detected static object is a luggage item, while the second is for verifying true abandonment. In particular, GoogleNet pre-trained on ImageNet was used to train the last layers of each CNN. In this specific approach, generated data including images of luggage and people holding or standing near the lugagge were used to train the CNNs. 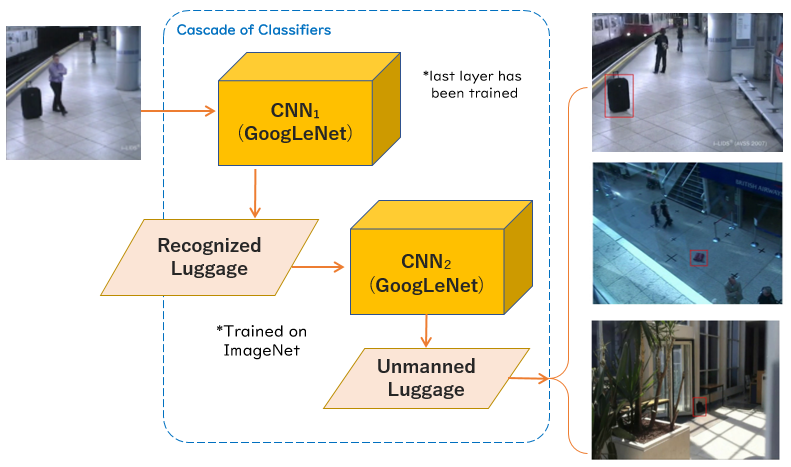 A combination of foreground estimation to detect static regions as candidates of abandonment, and use of Faster RCNN for person and object detection, and re-identification was used in Yang et. Al. (2018). Further frame processing was performed to calculate the average distance between the detected static object and detected persons nearby; spatio-temporal rules were then applied to perform owner labeling and detect abandonment event. This was further extended to performing event analysis such that they can classify if an object being tracked was (1) taken by owner, (2) moved by un-owner, or (3) stolen by someone; sample results are as shown in Figure 7 below.

In this blog, we went through the different deep learning approaches and use cases in performing abandoned object detection. Specifically, we learned that CNNs can be used to either augment the effectiveness of traditional static object detection approach, or for directly using class label and bounding box output for further frame processing to implement the abandonment logic.

For more information about the use cases, please contact our team.